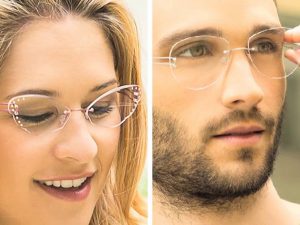 At KaraSpace we often hear the argument, that Apple is doing AR glasses now. How do we dare to compete against them. I can only say, the more common people think about the emerging of Augmented Reality glasses, the less the technological reality of optical systems and their enormous challenges count. Most people believe just like the managers of big corporation, that it is enough to throw money at the problem, and over time the problems are solved.

But Moore’s law does not apply to optics as it does to microchips. There is nothing to miniaturize in the concept of an optical system. The size requirements remain the same. You can just invent a new optical display concept.  AR systems are not about the evolution of existing display systems but about complete new creations in a paradigm shift.

Who really want to understand the challenge of mainstream AR must dive deep into the physics of optical systems. A good start is the Blog from Karl Guttag at www.kguttag.com showing the billion dollar struggle and despair of the optical designers to make them small.  Read the article: Start up with Ray-Ban, ends up like Hololens

The big corporations like Google, Microsoft or Facebook have failed completely in respect to create new systems. They can only look what others are doing and then copy or buy up a start-up company and do the best out of it. They would not even support small companies to do the innovation for them in the first place.

We can see it from the Google funded Magic Leap company, trying to generate optical ingenuity by throwing money to their own optical engineers to file piles of useless patents. They ended up using existing technology and building a bad copy of the Microsoft Hololens. Now they struggle to reduce the 300 million dollar payroll per year, having a useless product. All patents are collateralized to J.P. Chase Morgan and they have no prospect for a leading role.

There is a large number of smaller companies that are also developing AR Glasses, and even marketing them to niche markets. But most of them have a similar weak performance as the big corporations. A nice list of them is at the resources list of Kara here…

But the big players are all embarrassed by the simple ingenuity supplied by small companies like LetinAR and Kura to improve the wave guide systems through simple integral imaging pinhole projection techniques, building much smaller, brighter and cheaper systems with an enormous field of view and no vergence-accommodation problems at all. It is just a simple optical concept that makes the difference and not many years with billions of investment. LetinAR also followed the wise strategy just like KaraSpace, to turn the optical design from optical simulations to an actual product, by working together with the highly efficient Fraunhofer Institutes in Germany. This professional development strategy has also worked before with the KaraSpace integral imaging 3D Technology, turning to mature products for the RealEyes company.

Apple is also announcing the development of AR-glasses, but not because they have the solution to the optical problem. They simply see that mainstream augmented reality glasses have the disrupting potential to copletely shake up the mobile phone industry. Apple is monitored very carefully about their patents, company acquisitions etc.. Read more about Apple AR patents on the BGutter Blog here.   The fact that they acquired Akonia Holographics in 2018 leads to the assumption that they have no better technology them selfs. They will not come out with a technological surprise. The Akonia technology also relies on projection hardware that need to be placed in the face of the user and is not better then the LetinAR or Kura experience. The holographic combiner will also continue to have the vergence-accommodation problem. 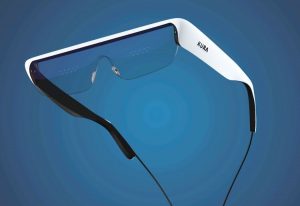 Now LetinAR  from Korea (at www.letinar.com) and Kura in San Francisco (at www.kura.tech) have nicely applied the superior concept of pinhole integral imaging projections, which is also one of the concepts used by the KaraSpace integral fiber optical system. But the two startups have combined it with the old waveguide concepts, leaving them with a whole set of inherited problems. But still their design is by fare better then the systems from Microsoft, Magic Leap, Apple or Facebook. At least for the special industry use, this glasses will find their way to the market.

But for the trillion dollar mainstream market, the design requirements are more rigorous. The pinhole waveguide, pin mirror or structured waveguide design, as they are called, are not capable to be used for a mainstream device for the following reasons. This compared here with the KaraSpace design for mainstream AR-glasses.

1) The Pinhole waveguide system has no way to hide the dots of the pinhole structure. The exit points can be seen from outside and my even glow in the dark. This looks very strange especially when having an eye to eye contact with other people. Destructing the eye to eye contact is a no-go criteria for a mainstream device. The KaraSpace pinhole exit point is hidden in the camouflaged cloaking tubes inside the glass, making them completely invisible from outside. An undestructed eye to eye contact is provided. The technical reason for this is, that the the cloaking tubes are guiding the light around the exit points.

3) The Pinhole waveguide system needs a projector at the side of the glass. Even if the projector is very small, it does not fit into any of the common spectacle designs offered today. If the number of pinholes is increased to offer a higher resolution, the projection hardware will be even much bigger and the glass needs to be much thicker. This may work for head up displays, but not for mainstream AR glasses. 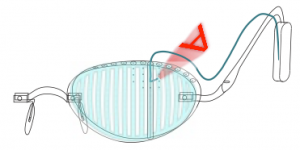 The KaraSpace system covers the entire glass with invisible integral imaging pinholes for a full field of view. Jet the projector is fare behind the ear and the head, delivering the images through optical fibers, that can follow any path inside the frame and around the glasses. With cloaked passages around the glass, it is even possible to have frameless minimalistic spectacles with the highest possible resolution.

It is a bit unfair to mention only the disadvantages of the pinhole waveguide design in comparison to KaraSpace. But the advantages are mostly shared or even exceeded by the KaraSpace system like the light strength and the universal focal plane.
Kura considers his simplicity in the production method as an advantage, but in combination with the lack of patent protection it is destined to be mass produced in China and in the cheapest way possible, wich will not lead to a successful product.

KaraSpace prefers the world wide patent protection combined with a high barrier of production technology, making it the premium product with uncompromised features. 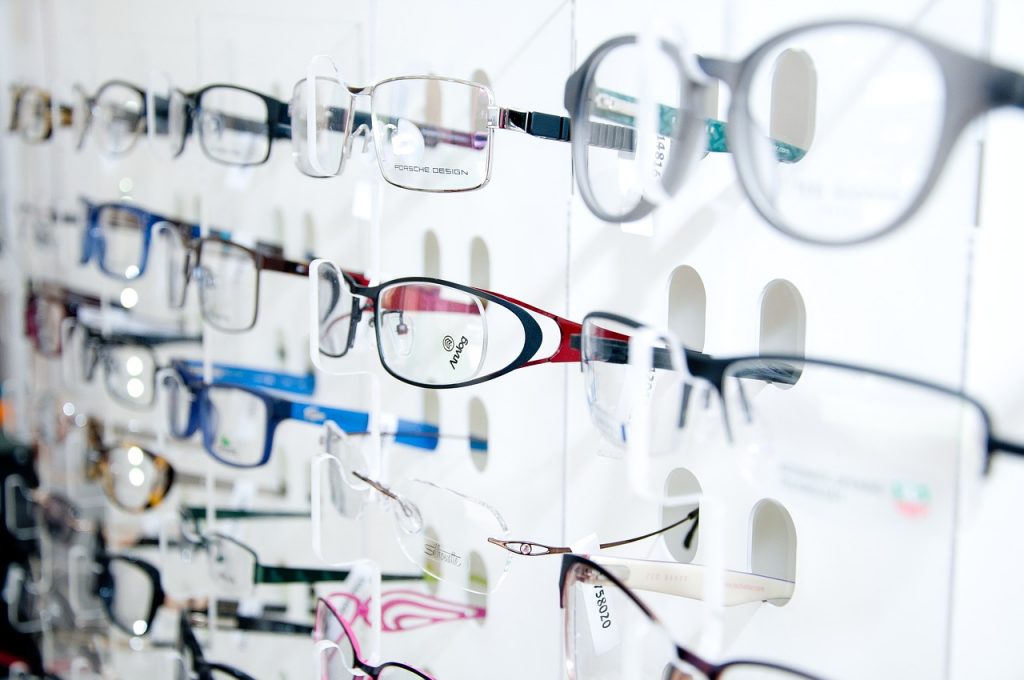 The asset test for real mainstream AR Glasses is, that the optical system can be integrated into any of the designs, that the world population is accustomed to. Also no technical clues in the face of the user and an undisturbed eye to eye contact. Only KaraSpace can provide this, with the highes retina resolution a and full field of view.

The KaraSpace company and its technology is still unknown in the US and the world wide AR industry, as the missing entry on reference list on the Kura website suggests.

The company is still in the strategic development and research state with new patents to be filed soon, revealing the power of absolut mainstream AR. With the professional help of the Fraunhofer Institute Network in the development of advanced optical systems, the optical simulations will turn into reality, just like the LetinAR company did it.

But solving the hardest optical engineering challenge is not enough to make mainstream AR-Glasses come true. 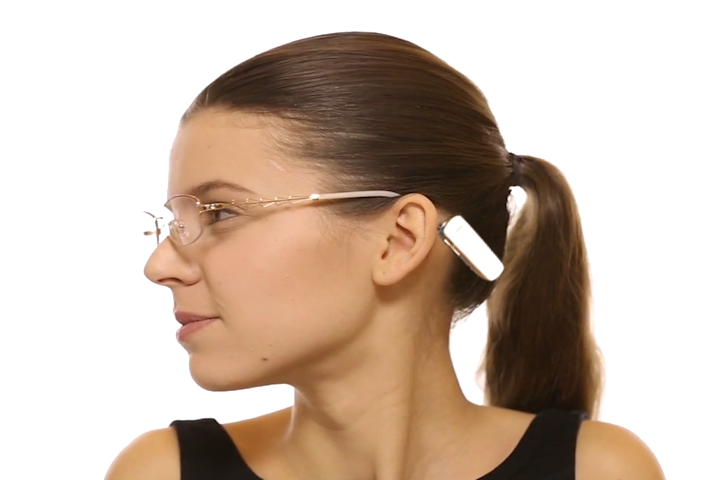 There is an even bigger and deeper challenge about AR Glasses to solve, and that is only reviled after you are actually confronted with it. That is why most people have not even thought about it. But the ones who did, are very concerned.

Uncontrolled mainstream Augmented Reality glasses will use neuron network artificial intelligence (AI), to recognize every object a user is looking at, understand every spoken word and every heard or read sentence. AI will bring all this information in a higher context. So the glasses will literally read and monitor your mind and all you environment, archives it inaccessible on the cloud and manipulate you at will accordingly. You will not be able to escape from it, as your neighbor will monitor you. With the freedom of thought at risk for the comping generations, we must follow the words of Tim Cook from Apple and the German President Steinmeier and act responsible.

Mainstream AR will therefor inevitably lead to the fusion with the biggest innovation today, being absolute trust constructed by blockchain technology with open source software and the programer community to guard the integrity. Nobody want to be socially forced to naively trust a social media provider, not to sell the own personal most profitable data.

To meet this challenge, KaraSpace fuses the AR-Glasses with an open source operating system. All privacy relevant procedures are executed in an highly comprehansive open source application system, that can be monitored at run time, and that is so easy to understand, that it serves as proof of integrity. It is hashed unchangeable on the blockchain, with only user communities being able to change it together.

But once AR is fused with blockchain technology and becomes mainstream, also the virtual objects and rights in the newly created virtual world get tokenized and become a giant virtual asset.

The KaraSpace business case is highly complex and very exciting. Read more about it in the following article: Why are there no AR-Unicorns around?