But why are there no AR-Unicorns around, beside Magic Leap. 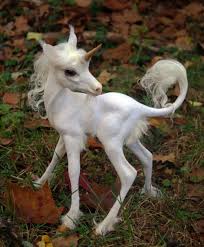 This is a key question asked in the AR space for quite a while now.
Most people people don’t even understand, why should there be AR-Unicorns at all. Only if you go deeper into the analysis you understand the vastness. If AR glasses go mainstream, it means that they are indistinguishable from normal spectacles. The display experience is so good that they make any smartphone, tablet, desktop monitor, TV or game console obsolete. The new immersive vision create new social and working environments and disrupts the communication and media landscape. But on top, people will share a top virtual layer, visible by all users through the AR-glasses. Since this space is shared by all users, the objects and the use-right of this layer miraculously reveal a vast wealth of virtual assets with real world value. This trillion dollar reward should be enough to put some thoughts and efforts into the project.

But the problems with AR glasses are so many fold and deep, that few people dare to put more energy into it:

1- Business risk) The general problem is, that the risk of failing is too high, even with the best idea. This includes the risk of being overrun by other following companies, the risk of being cheated by big players, the risk of not reaching the market at all and being stuck in the research and so on. This would all results in personal financial disaster. But this is true with all kind business.

2- Complexity) But then there is the shear complexity of the technology. Nobody can do all the needed subcomponents, but nobody knows what needs to be tackled. Nobody knows which role they can take over in an AR-Industry.

3- Patent jungle) There is the jungle of AR related patents. If a patented technology wants to find a way on to the market, it must have the license of so many related technologies.

4- Early looser) The technology development is only at the beginning. If a company like KaraSpace provides patents and secret know-how early in the game, there will be only the latest companies with follow up patents that make the profit.

5- Optical system) The biggest problem is the optical system as described in the previous article. Many professional optical designers are postulating, that it is physically impossible to build AR glasses as small as normal spectacles.

6- Optical experts) It is difficult do get experienced optical designers to do the demanding task to build mainstream AR.

7- Hardware funding) The funding of hardware developments is quite difficult for a number of reasons.

8- Psycho threat) There is the psychological barrier that no one dears to be active in a field where all the big companies are active.

9- Software applications) The problem is, to find software developer for a new hardware platform, specially if the hardware is only an intermediate state.

10- Ethics) The social resistance from the normal people is also many fold. If you confront a mother with AR glasses, she will say it is not a good idea to increase the potential of addiction for all the children, as it is already too much with the smartphones. If you ask in different countries, you see enormous cultural differences in ethics. One standard for all will not work. If you ask a European about AR, he may ask you if you want to sit in a glass house all day long. And that is exactly the point. The privacy concerns are so evident that the success of AR is very questionable if that problem is not solved.

11- Open Source financing) The gigantic ethical problem can be solved with rigorous open source strategy, but that creates an equally big problem with the financing of the system. No classical investor, or at least no VC company would fund an open source project.

12- Alternative business model) Solving the ethical problem of AR will be in opposition to of the Big Data business model that Google or Facebook are using. A new ethical business model must be found that is equally vast and fits in the new world of AR glasses and the demanded ethics.

So the mainstream AR business is really complex.

Unicorns are often formed, when on of the very few wealthy and influential individuals with entrepreneurial spirit is spotting a mega trend. But for AR-Glasses the optical problem can not be solved with money and influence as explained in the previous article. Venture capital and entrepreneurship is very selfish, and so the very rare coincidence must happen, that the entrepreneur has also the vision to solve the optical problem as well as all the other problems of AR.

KaraSpace, with his enterprise architect and CEO Konstantin Roggatz has accepted the challenge of AR complexity and has designed the KaraSpace Enterprise Project to solve all the above problems. 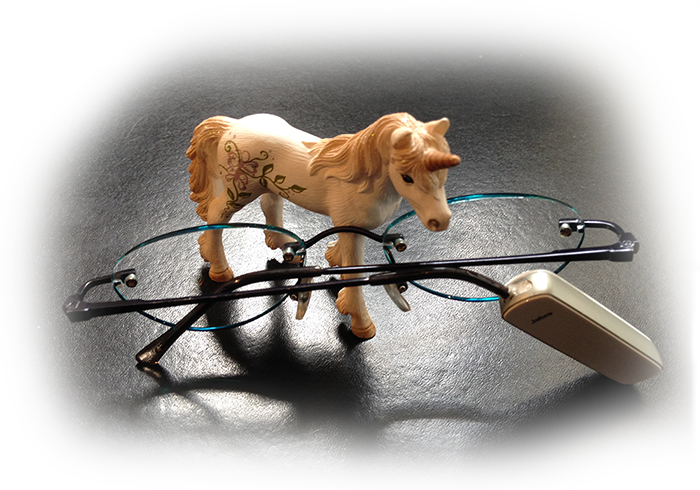 As the main requirement for mainstream AR glasses, KaraSpace has solved the hardest optical engineering challenge with an ingenious combination of unconventional optical concept (5-Optical system). See more about this technology on our pitch videos here..

But it had to solve also all the above problems with a sophisticated business strategy to reduce the overall business risk (1-Business risk).  That led inevitably to the fusion of AR with the whole set of blockchain innovations.

The complexity of the AR technology demands, to give up the idea to do everything by your self. Instead, we must support a whole industry to do it (2-Complexity). The first thing the industry needs, is a clear order to build this new computer platform and a centralized joined project management to assign and synchronize the different developments to the best possible partners. For this, a consortium is set up, with a contract to agree on a fair distribution of the final profits even for early starters (4-Early losers), the handling of the patent rights and the management of the patent portfolio (3-Patent jungle), the roll of each partner and many other concerns that are needed for a team. The consortium is further building up a central infrastructure to organizing the financing of the consortium members if needed (7-Hardware funding). To support the product development of the consortium partners, the most difficult optical and technical parts are conducted in cooperation with the German Fraunhofer Institute, known for its excellent development work. This avoids the need to build up highly skilled teams them selves (6-Optical experts).

The second biggest technological problem for AR glasses is, how to guarantee the absolute privacy, when wearing AR glasses. This is achieved by an open source operating and application system, that is monitored by a programmer community and hashed securely on the blockchain (10-Ethics). This is the first link of AR-glasses with the blockchain technology.
This open source operating system is associated with a whole set of ethical rules, that are demanded by many voices in society. This are besides privacy also the prevention of addictions (10-Ethics), reduction of advertisements and the big data business and general blockchain democratization.

So when AR naturally reduces the Big Data and advertisement business, what is the giant business model that can easily replace it? Mainstream AR-glasses create a new virtual world on top of the real world. The top layer shared by all users will be the single most valuable system created by the consensus of the masses that let Google and Facebook look very small (12-Alternative business model). The assets and land use rights will be secured on the blockchain with real world value and the owner of the AR-Hardware will be the provider of final resort for all this assets. This is the second link, that makes AR glasses and Blockchain inseparable. Further tokens like stable coins citizen ship or artificial life in this space will make AR-glasses and the underlying world the absolute power application for the blockchain technology.

But to actually get there, a very big challenge is to fund all the specialized hardware and software developments that are needed for the realization. This is, where the present Security Token Offerings (STOs) play an important role. The Swiss KaraSpace consortium will organize this token sales, to finance all the specialized AR companies, that can not pay the new developments by them self (7-Hardware funding).
For the modern investor the KaraSpace security tokens will not only be held and traded on the blockchain, but will represent the very heart of AR-Blockchain technology (11-Open Source financing) being open source at the very heart.

The KaraSpace Consortium follows the project plan and will pick the best suitable partners to supply the components. It will conduct the token sales with the best conscience to provide security tokes of key suppliers of the future AR-industry. This may include companies for optical hardware development and production, system software and application software development but also marketing logistics and future research.

The investor will not only receive security tokens bound to the profit of real companies. They will also obtain tokens resembling digital assets in the KaraSpace world, which have the potential to gain much more then simple profit shares.

With the knowledge of the KaraSpace patented technology its business model, everybody looses the fear over the big players activity (8-Psycho threat).

But the token sales have not only the function of crowd funding. KaraSpace is building the biggest consensus on a single system in the form of a virtual country that we call KaraSpace. We use sophisticated marketing to bind as many user groups to the virtual country as possible. Investors, land speculators, programmers, privacy activists, gamers and so on. Specially the programmer community is targeted, as it plays an integral role in the maintenance of the privacy insured system and the blockchain hardware network (9-Software applications). They are particularly funded through token sales and encouraged to work on application research and development in an early state.

The non profit KaraSpace Association represents the virtual country, and  is given the immeasurable wealth of all the virtual assets, to be the spender of last resort for the good of all the People and the thriving of humanity through the AR experience. It is given an incorruptible governance with direct democratic principles. After maturation of the governance, it is split into many independent chapters and countries.
The KaraSpace initiators are convinced, that no person or company shall explore the wealth of the virtual world for the insatiable personal or shareholders profit.

The AR-consortium of the KaraSpace Association is solving exactly all the above problem of AR, and it is designed to generate a whole herd of AR-Unicorns that are moving all in on direction and not spearing each other on the run. Again no singe company shall obtain the monopoly. 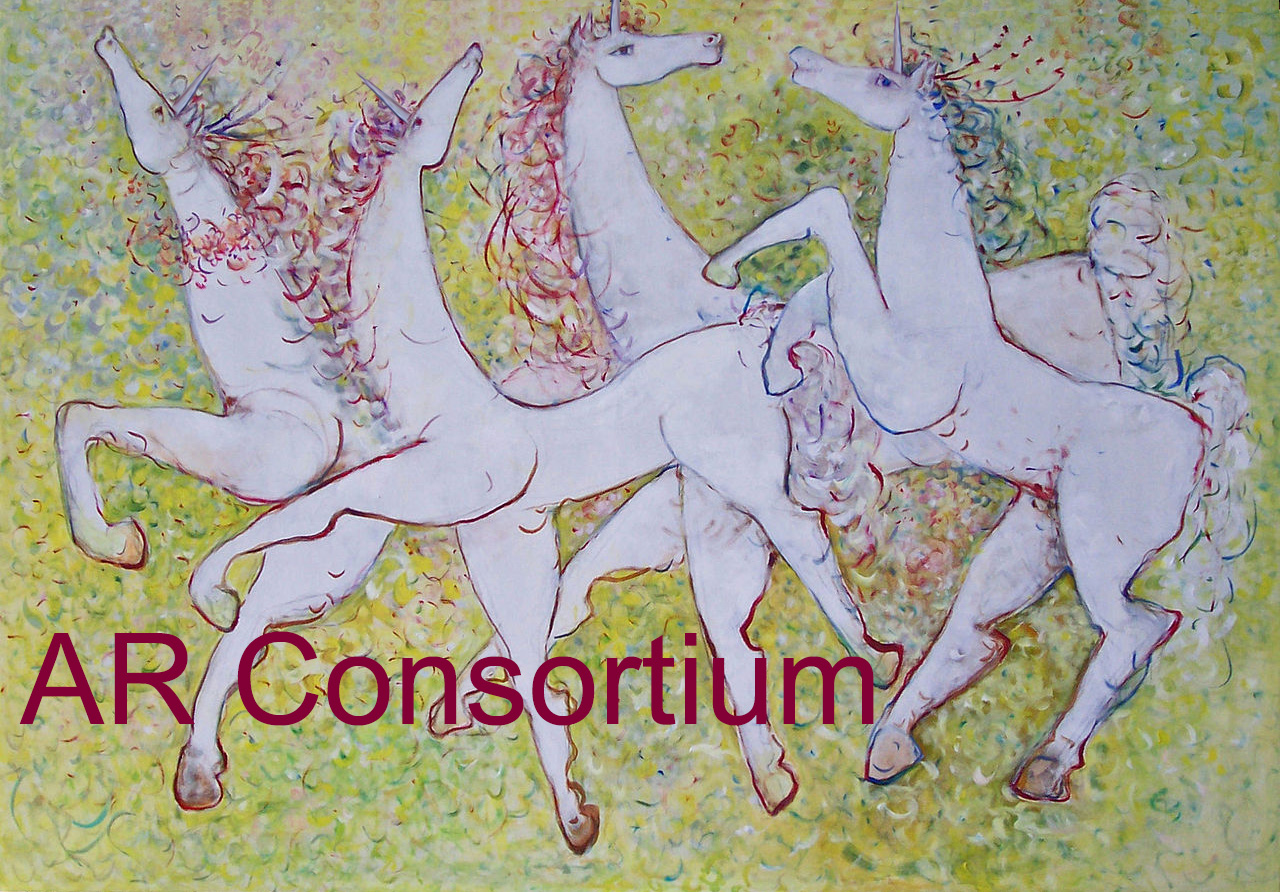