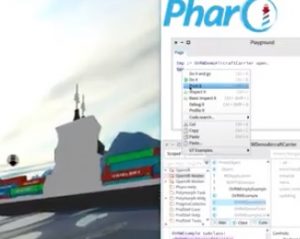 Woden communicates with the 3D graphics via the abstract-gpu abstraction layer.

Woden on Windows requires a modern graphics card with support for at least one of the following two graphics APIs:

Woden on OS X requires a Mac with support for the Metal API.

Woden can be loaded in a 64 bits Pharo 7 image by running the following script in a playground:

For checking the Woden samples, you should check the class side of WDASceneExamples for some examples, or you can just run the following script for blue window:

This Demo uses Pharo and its “Woden 3D Engine” developed by R. Salgado.

Another way is to interface to existing 3D engines like Unreal, as demonstrated in the following video.