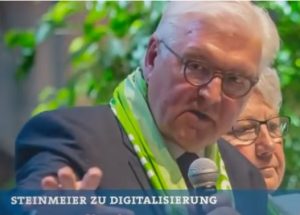 Federal president of Germany, Frank-Walter Steinmeier has called for a reshaping of the digital world and bringing it closer to the citizens. “We do not have to worry about the digitization of democracy first and foremost, but about the democratization of the digital,” he said on Thursday in a keynote speech at the Protestant Kirchentag in Dortmund. The citizens would have to regain the political space, said Steinmeier – “against the brutalization and shortening of the language and the debates, but also against the vast concentration of power in a handful of data giants from the Silicon Valley”

No data capitalism, no surveillance

As a way out, Steinmeier suggests an European model of digitization, which differs from “unrestricted American style data capitalism on one hand, and Orwellian state supervision like in China on the other”. The Germans in particular have proven that they believe in progress, but also “set an ethical and social framework” for themselves. This calls for strong civil society, as well as for companies and politicians.

Because technical progress is not a “monstrous natural event against which we are powerless,” says Steinmeier. Rather, the digital world “around us” was designed to serve the interests of those “who preset our devices, program our applications, and direct our behavior.”

This design, this programming must be changed so that “technology can serve us humans” – for example for education, service and health. “What has been programmed once can be reprogrammed,” said the federal president. “So let’s dare and change the program!”

The basis for this must be an “ethic of digitization,” he demanded. Already today, algorithms have to be made more verifiable, compelling companies to protect data privacy and personal privacy, to offensively prosecute hatred  in the internet, demanded the head of state.

The complete speech of President Steinmeier here on ZDF.de

The digitization with the new AR glasses will challenge society a lot more than the president can imagine. All the more urgent is his appeal in the context of mainstream AR. And most important is the support of the KaraSpace ethics initiative.