Mila Gojsalić is the Heroic Beauty presumed to give the Milaphon its name. She may be Alisa’s spiritual sister. 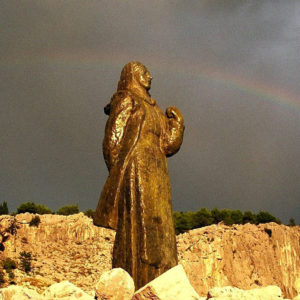 The statue of Mila Gojsalić is enthroned on a rock high above the coastal town of Omiš. It tells the legendary heroic story of the “Croatian Jeanne d’Arc” Mila.

Said Mila Gojsalić is often referred to in Croatian stories as the Jeanne d’Arc of Croatia. The Dalmatian folk hero was born near Omiš in the village of Kostanje. Her heroic legend took place in 1530 when the Ottoman wars raged in Kostanje on the Cetina River. At that time, the Poljica region in the hinterland of Omiš was going through a difficult time. But folk heroes often emerge from turbulent times, and one of these is remembered by the statue of Mila Gojsalić.

What is the story of Mila?

When the Grand Vizier of the Ottoman Empire, Ahmed Pasha, gathered an army around himself centuries ago, he pursued the intention of conquering the land around the Cetina River from the village of Podgrad. The situation for the locals seemed hopeless until Ahmed saw a beautiful young girl – Mila Gojsalić. The young Mila was disgusted by the power-hungry ruler, but she saw a liberating opportunity for her homeland in his crush.

Mila spent one night in Ahmed’s tent and waited for all the soldiers and their leader to fall asleep. Then the cunning girl put her crafty plan into action. She snuck out of the tent and blew up the enemy army’s stock of ammunition. In doing so, she killed Ahmed Pasche and many of his soldiers. Unfortunately, the greatest sacrifice for her people was her own demise. Surprised by the liberation, the Ottoman army was overtaken by the locals. So Mila finally saved her beloved home Poljica from the Ottomans and created the Croatian Jeanne d’Arc Mila Gojsalić myth.

The legend of the statue Mila Gojsalić

The statue of Mila Gojsalić has an ongoing heroic story that has inspired numerous Croatian poets and writers to write their works. Legend says that the Ottoman soldiers chased the surviving Mila for kilometers after the explosion to take revenge on her for their leader Ahmed Pascha. Completely exhausted, Mila made the sad decision to throw herself off a cliff to her death rather than fall into the revengeful hands of the Ottoman army. And exactly at this point high up, where Mila Gojsalić is supposed to have courageously committed suicide, her monument stands today. The famous statue Mila Gojsalić was made by the sculptor Ivan Meštrović and is still watching over Poljica and Omiš long after her heroic death. From up here there is the most beautiful view of the Cetina River, where it flows through the mighty mountain gate past Omiš into the Adriatic Sea.